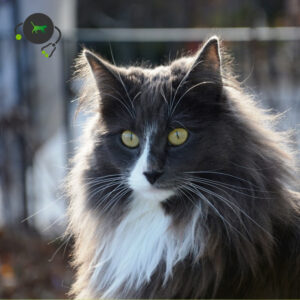 Glycogen storage diseases (GSD) are a group of diseases of glycogen metabolism that result from glycogen accumulation in different tissues.
The sugars from the diet are stored as glycogen in the cells.
During exercise, this glycogen is converted into energy used by the muscles through the action of different enzymes.
GSDs have as their origin a failure of one of these enzymes. As a result, glycogen can no longer be converted into energy, so it accumulates in cells.

GSDs are classified according to the activity of the deficient enzyme and have been numbered in chronological order.
The clinical symptoms of GSD are different, depending on the enzyme that is defective and the type and location of glycogen accumulation.
In Norwegian-born cats, type IV glycogenosis (GSDIV) is caused by a deficiency of α-1,4-glucan 6-glucosyl transferase.
This disease affect 4% of Norwegian cat.
GSDIV is also known in horses and humans (Andersen’s disease).
GSDIV in Norwegian cats is due to abnormal glycogen accumulation in myocytes, hepatocytes or neurons.
This accumulation causes lethal tissue damage.

The DNA test for the detection of GSD IV can be performed from the age of 2 months. Like all genetic tests, this test is very reliable.
The test is carried out using a suuf loogu talagalay, which is quick and easy to perform.

Screening and interpretation of results

The GSDIV of the Norwegian cat is due to a complex rearrangement within the GBE1 gene. This rearrangement consists of a 334 bp insertion and a 6.2 kb deletion that extends from intron 11 to intron 12.
This mutation is hereditary according to an autosomal recessive mode with complete penetrance.